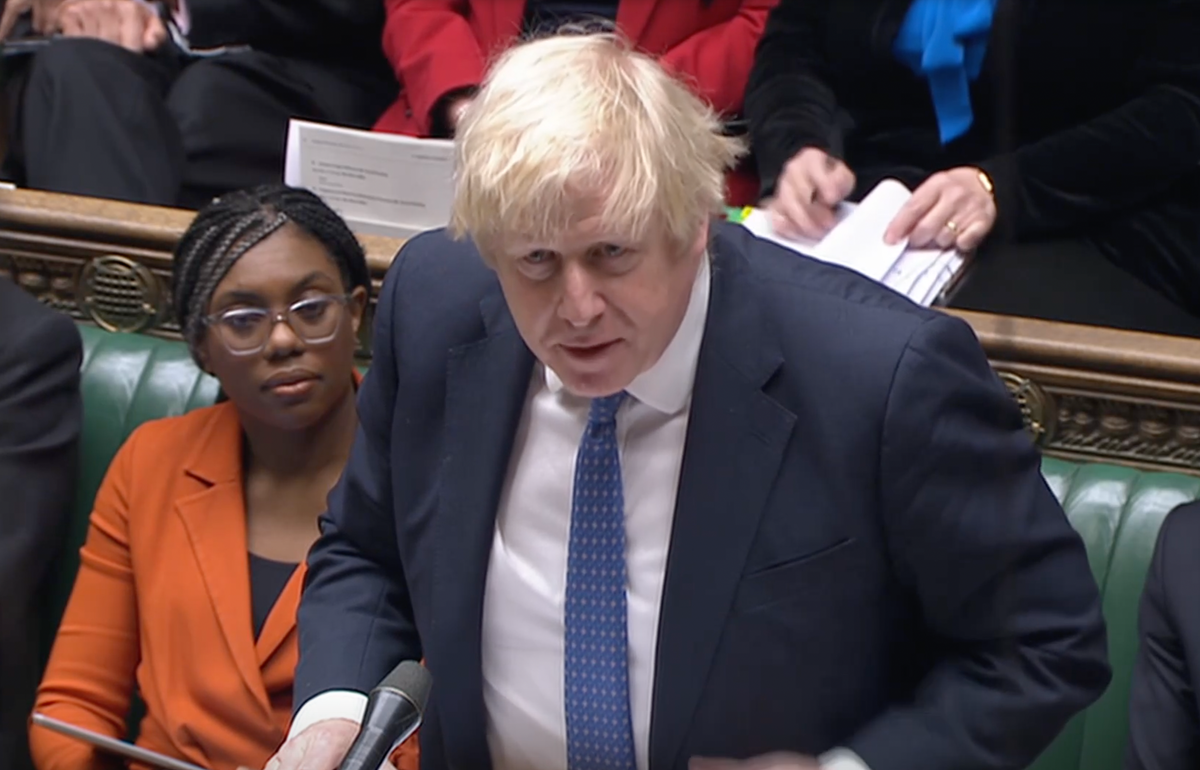 The prime minister and Sir Keir Starmer are going head-to-head in today’s Prime Minister’s Questions (PMQs), where it is thought Boris Johnson’s performance will be under intense scrutiny following another week of blunders – including reports of a dozen Tory MPs sending letters of no confidence in their leader.

Dominic Raab earlier claimed the PM is “on great form” despite concerns following a speech he gave on Monday, in which Mr Johnson lost his place, went on a tangent about Peppa Pig and made car engine noises.

Branding reports claiming backbenchers had written to Sir Graham Brady, chair of the 1922 committee, as “Westminster tittle tattle”, the deputy prime minister told the BBC and LBC respectively that his boss was a “Tiggerish” leader and went where previous leaders could not by breaking from the script.

Under Conservative Party rules, a leadership contest is only triggered if 15 per cent of sitting Tory MPs write a letter to Sir Graham demanding one – a figure which currently equates to 54 letters. A Tory source told The Telegraph: “It will not get anywhere near the [number of] letters you would need, but it does cause angst.”

Following my last post, Sir Lindsay Hoyle has given his brief statement to the Commons.

The speaker said he understood there were conflicting views raised by Stella Creasy’s case, and that he had considered all of them.

As a result, he says, he has asked the chair of the Commons procedure committee to bring forward “suggestions” for a resolution, which MPs will then be able to consider.

Making the announcement, he insisted the House must be able to conduct business “without disturbance” – referring to a baby’s needs – but acknowledged “we must also move with the times”.

He added “it’s important that parents of babies and young children are able to participate fully in the work” of Westminster, pointing to the onsite nursery and creche as proof of this.

Ms Creasy’s argument is that her child is to young to be placed in such care.

BREAKING: Speaker to give statement about babies in Commons

Sir Lindsay Hoyle, speaker of the Commons, will make an urgent statement to MPs at 11.30am on rules around babies being allowed in Westminster.

It follows backlash to Labour MP Stella Creasy being reprimanded on Monday for taking her three-month-old son to a Westminster Hall debate.

Ms Creasy was left baffled having previously taken her older daughter to the Commons in 2019, with no complaint.

It is thought Sir Lindsay will clarify whether the rule, which is an apparent ban on MPs being allowed to bring their children to parliament, is a longstanding or a new one.

Labour’s deputy leader is back with another graphic, this one by the Labour Party, it seems, outlining the disproportionate costs placed on poorer families by the Conservative’s changes to England’s social car system.

“A family in a terraced house in my constituency will lose almost everything they own,” Angela Rayner tweeted, adding: “A millionaire in a mansion will lose less than 9 per cent.”

Starmer and Johnson to face off at PMQs in 45 minutes

It’s less than an hour to go until Prime Minister’s Questions (PMQs), where Boris Johnson will butt heads once more with Sir Keir Starmer.

The Labour leader is expected to continue taking advantage of the faltering PM, amid reports his MPs have begin submitting letters of no confidence.

More tory controversy in the form of the Windrush compensation scheme could become a key topic of Sir Keir’s, as well as his opponent’s rambling speech on Monday and ongoing allegations of Tory dissatisfaction with the PM’s premiership.

Families of Covid victims are claiming Boris Johnson broke a pledge to involve them in choosing the head of the planned public inquiry, after weeks of silence.

In September, the PM finally met with the families – after refusing to do for almost 400 days – and agreed to give them a “clear role” in both the inquiry’s terms of reference and in selecting its chair, writes our deputy political editor Rob Merrick.

But, the Covid-19 Bereaved Families for Justice group says it has heard nothing from Downing Street in the eight weeks since, prompting mounting anger among its members.

PoliticsHome’s Adam Payne is reporting that Lord Frost will address the 1922 committee for the first time today, as cross-party MPs continue to flag concerns about ongoing issues with the “unworkable” Northern Ireland Protocol.

“A bit of Brexit fighting talk to calm the troops, perhaps?” Payne quips.

One senior Tory MP is said to have told the website Mr Frost’s appearance is “unlikely” to calm the overall mood within the party, amid reports of a dozen Conservatives submitting letters of no confidence to the 1922 committee.

Another government source said the Brexit minister would update MPs on talks with Brussels but wouldn’t be making any kind of announcement – suggesting talks remain at a standstill.

Let’s get a Christmas update now. Shane Brennan, chief executive of the Cold Chain Federation, a trade body representing the temperature-controlled logistics industry, told MPs today there will be fewer food items on the shelves this Christmas due to pressures in the supply chain.

Speaking before the Commons transport select committee, he said: “People have made decisions about what they think is achievable, and so we’ve got quite a significant scaling back in the amount of work we’re trying to do, particularly around Christmas.

“The food supply chain gears itself up to deliver at Christmas, and it’s quite a lot [to be] scaling back at the ambition of that.

“Whereas normally it’d be get as much out as possible, to sell as much as possible, to make as much revenue as possible for customers that time, we’re having to sort of scale that ambition back to try and deliver what we absolutely can.”

Giving evidence, Mr Brennan went on to clarify “it’s not about shortages, it’s about simplifying, so having less range obviously is one of the key decisions you can make in trying to make supply chains more efficient”.

He said the industry is “very good at piling high and selling cheap at Christmas time” but what is necessary now is to “strategically scale that back in order to meet the promise that there will be the stuff you expect to see on the shelves, but not necessarily all the extras”.

While Mr Brennan signalled he believes the move is doable, he acknowledged that “the knock-on effect of that is lost revenue, lost profitability”.

Poll: What do you feel has been the Coservative Party’s biggest blunder?

Is the uproar around Boris Johnson’s Peppa Pig speech simply a “Westminster bubble” story? Tory MP Jeremy Hunt has said that he does not expect people to remember the prime minister’s faltering address.

“In politics you have speeches that go well, that don’t go well. I mean, you’re talking to someone who as the foreign secretary called his Chinese wife ‘Japanese’ and I managed to get through that,” the former Tory minister told reporters this week. “So I don’t think in the grander scheme of things people will remember that particular speech.”

But what do you think? How do you feel about the current government? Will the growing number of problems end up sticking or is this another issue that Boris Johnson can emerge from unscathed? If you think the government’s made mistakes, what are they?

Let us know in our poll below.