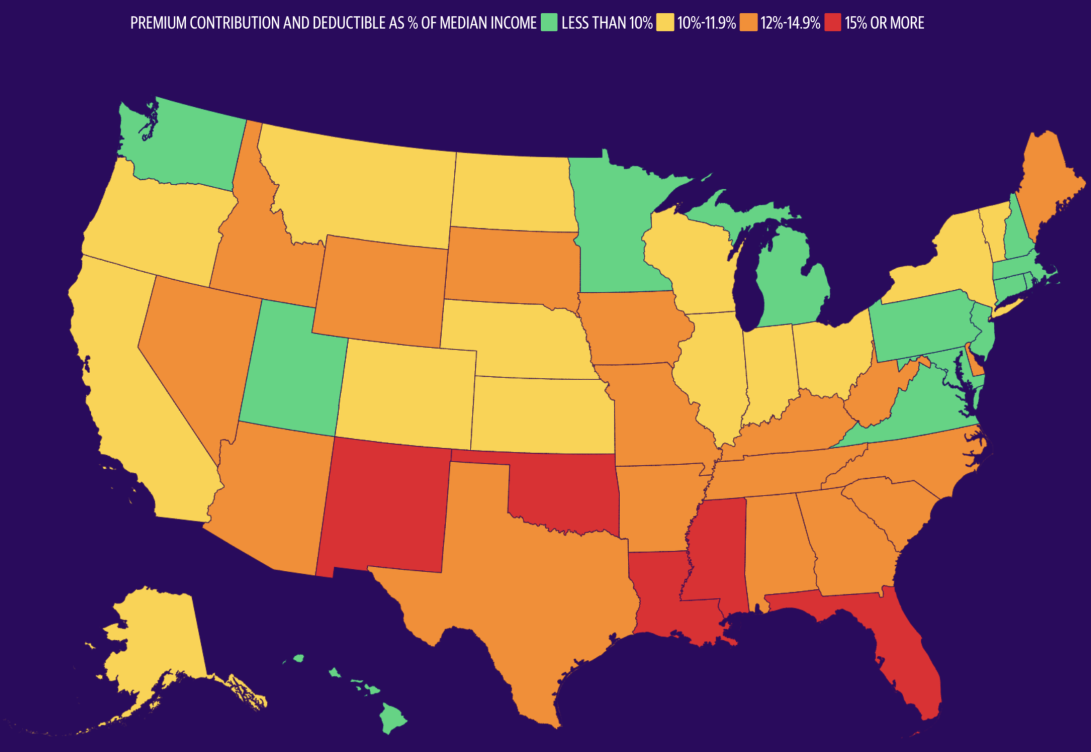 Health care costs have continued to increase over the past decade despite the landmark passage of Obamacare in March 2010.

A recent report from the Commonwealth Fund found that health insurance premiums and deductibles for Americans with employer-sponsored coverage accounted for 11.6% of median income in 2020, a whopping 9.1% increase from 2010.

“The findings are a stark reminder of what we already know — that health care costs are rising more quickly than the income for working families,” Sara Collins, vice president for health care coverage and access at The Commonwealth Fund, told Yahoo Finance, “which means health care costs are taking up a larger and larger share of household budgets.”

Premium contributions and deductibles vary widely by state. Five states — New Mexico, Oklahoma, Louisiana, Mississippi, and Florida — spend between 15-19% of their median incomes on these costs.

“If you’re spending more on premiums, that’s just coming right out of your monthly budget,” Collins said. “So you usually have less money to spend on other items. If your deductibles are growing, you might not necessarily meet the deductible or have to use any health care, so it might just be potential spending on care.”

Deductibles, meanwhile, are also taking away chunks of cash from Americans. Hawaiians spend the least amount at $1,346 while Montana residents on average have to meet a deductible of $2,517.

Why are health care costs rising?

Chris Meekins, a health policy analyst at Raymond James, told Yahoo Finance that the primary drivers of health care costs in the last decade “basically have been hospitals and providers.”

On top of that, Meekins explained, the Affordable Care Act requires insurers to submit data to prove they are spending at least 80-85% of premium dollars on medical care, i.e. medical-loss ratio.

“You’ve got this situation where there’s almost an incentive for insurers to raise costs for something,” he said, adding: “But that also means on the flip side of that, let’s say 15% can be spent on overhead or profit or stock buybacks or all these other things. For that 15% to get bigger, the 85% also needs to get bigger as well.”

“Even though we’re not necessarily using more care, premiums are going up because the overall cost of care is going up,” Gee told Yahoo Finance. “A lot of the increases in overall spending are really driven by prices and not costs.”

And it’s not just about seeing the doctor more, she explained, but rather the price component of cost instead of utilization.

“There are a few different reasons for that,” Gee said. “One is that commercial insurance rates are quite high. Often for hospital care, private plans are paying more than double what Medicare would do for the same service in the same metropolitan area. Employers have limited ability to negotiate lower rates because of the consolidation and continued consolidation of health care systems, hospital systems, and other providers, and they just don’t have the market power to demand lower rates.”

Deductibles are ‘a disincentive for people to get care’

High deductibles, according to Collins, are part of the reason why many people avoid seeking medical care.

Deductibles are “problematic from an affordability standpoint for two different reasons,” she said. “One is just a pure financial issue and the other is an access to care issue. The deductible is very important because it’s the way in which we’re incentivizing people to get health care. If they’re facing high deductibles, they’re just going to be less likely to get the health care they need.”

Collins continued: “What we’ve found that it does for people with lower and moderate incomes is that it’s a disincentive for people to get care,” she added. “People with higher deductibles are less likely to get health care when they need it because they want to avoid the costs associated with it. We also know that when people do get health care when they have high deductibles, they’re more likely to report they carry medical debt or are having difficulty paying their medical bills.”

Lower-income and middle-class workers often shoulder more of these costs than their higher-income counterparts, and part of it has to do with employer compensation packages.

“Some people contribute very little to their premiums,” Collins said. “Companies where wages are less generous, so are the benefits. Obviously, a lot of people work in companies that don’t offer benefits at all, so they’re without health insurance coverage, at least through an employer.”

“You think about benefits in higher-income, higher-wage companies — companies where board workers are earning more salary — the benefits tend to be more generous, so better health coverage, more generous retirement packages,” she added. “Overall, they’re just seeing a much more generous compensation package. That seems to include on average the amount they’re having to contribute to their premium.”

The other issue is that wages, especially for lower-income earners, haven’t kept pace with inflation or rising health care costs, like premiums and deductibles.

Adriana Belmonte is a reporter and editor covering politics and health care policy for Yahoo Finance. You can follow her on Twitter @adrianambells and reach her at [email protected]

Read the latest financial and business news from Yahoo Finance