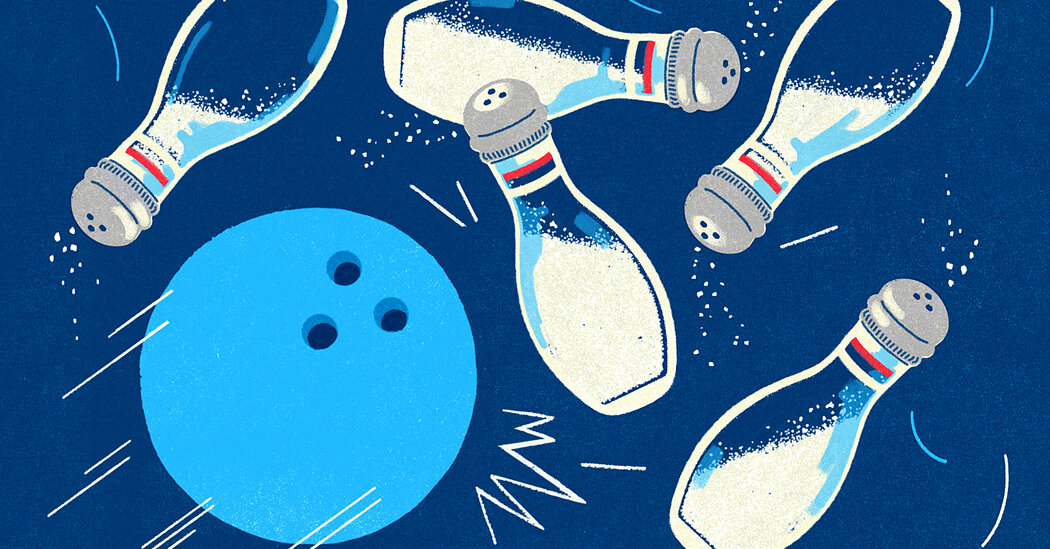 The ongoing problem with salt is thoroughly discussed in an excellent book published last year, “Salt Wars, The Battle Over the Biggest Killer in the American Diet,” by Michael F. Jacobson, the former executive director of the Center for Science in the Public Interest, a consumer advocacy group based in Washington, D.C.

Without waiting for a regulatory hammer, Dr. Jacobson told me, “some companies have made a real effort to lower the amount of sodium in their products. There are lots of tricks companies can use.”

For example, in its canned tomato soup, Campbell’s replaced a quarter of regular salt with potassium chloride, lowering sodium from 760 to 480 milligrams per cup, with no adverse effect on consumer acceptance. Nabisco cut the sodium in Wheat Thins, my favorite snack cracker, from 370 to 180 milligrams an ounce, and General Mills reduced the sodium in Wheaties, the cereal my sons grew up on, from 370 to 185 milligrams an ounce. For those fond of crunchy chips, check out the Kale & Spinach Tortilla Chips from the CVS store brand Abound, which have only 75 milligrams of sodium an ounce (about 11 chips).

Tips for cutting down on sodium

Companies have found that gradually lowering the sodium content of their products and making no fanfare about it, like not claiming they’re “low sodium,” actually fosters consumer acceptance. Most people don’t even notice the change. But you may not have to wait for companies to do the work. For example, you can reduce the salt in many canned foods, like beans, by rinsing them in a colander. Or try my trick of diluting the salt in canned soups by first filling the bowl or pot with fresh spinach and other quick-cooking or precooked veggies before adding the soup and heating it in the microwave or saucepan.

If you hope to enhance your health by cutting down on sodium, one trick is to avoid going cold turkey. I and many others have found that it’s relatively easy to reduce one’s preference for high salt by gradually using and consuming less of it. As your taste buds adjust, high-salt foods you once enjoyed will probably taste unpleasantly salty and thus easy to resist.

In cooking, rather than adding salt when preparing a recipe, try salting the finished product, which is likely to please your palate with considerably less salt. Seasoning foods with citrus juices, hot-pepper flakes or other pungent herbs and spices can go a long way to make up for reduced salt. You might also eat less bread; as a category, bread and other bakery products contribute more to Americans’ sodium intake than any other foodstuffs.

But an even greater contribution most likely comes from restaurant-prepared foods, which Dr. Jacobson calls a salt-laden minefield. I’ve noticed that the day after I dine in a restaurant, I weigh about two pounds more, not because I ate two extra pounds of food but because the excess salt in what I did eat retains that much water in my body.