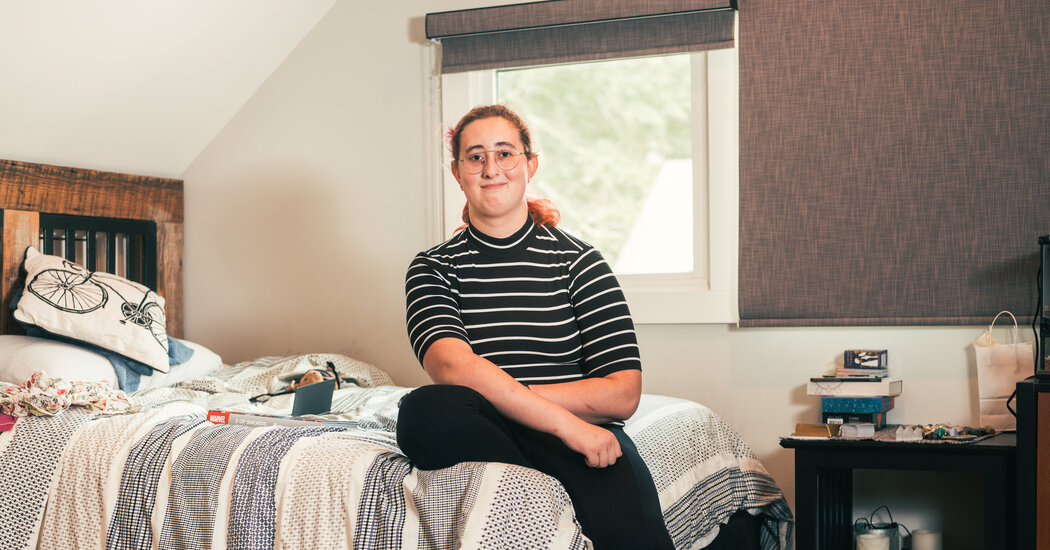 Piper, a 17-year-old transgender girl, says she knows she is fortunate.

She lives just outside Atlanta, with a supportive family and two rescued leopard geckos, Saturn and Juno. Queer Med, a private gender clinic, is a short drive away; two years ago, she started a regimen of gender-affirming hormones there, after five months of asking — a comparatively short wait. The treatments have precipitated a monumental shift in Piper’s perception of herself. “I’m just more confident in my body,” she said. (Piper’s family members asked that she be identified by only her first name to protect their privacy.)

Things are not perfect. Piper still sees a regular pediatrician for her other health needs, but staff members there still occasionally use the wrong pronouns or her former name. Her family’s new insurance plan is not accepted at Queer Med, so they must pay out of pocket for every visit — about $150 not including lab fees.

And the threat of her care becoming unavailable is constant, as Georgia is one of 20 states this year that introduced bills to prohibit or restrict gender-affirming treatments to minors. Piper plans to leave the South after high school, out of concern for her health and safety. But it could all be much worse, she knows. “I am so lucky,” Piper said. “A lot of people don’t get the chance.”

Many obstacles prevent young transgender people from getting the health care they need, according to a recent study in the journal JAMA Pediatrics; these include stigma and discrimination from the health care system as well as legal, economic and social obstacles to obtaining gender-affirming care. A 2019 study by the Centers for Disease Control and Prevention estimated that about 1.8 percent of high school students in the United States identified as transgender.

The JAMA paper is the first review of qualitative studies on young transgender people’s experiences getting access to health care. It encompassed 91 studies from 17 countries over several decades, and it included transgender and nonbinary youth from 9 to 24 years old — a broad range, made necessary by the extremely limited data on the subject.

“There’s currently such a huge disconnect between health care providers and trans youth,” said Dr. Lauren Chong, a pediatric trainee at the Sydney Children’s Hospitals Network in Australia and an author of the review.

“The findings were not surprising at all,” said Talen Wright, a graduate student studying transgender people’s mental health at University College London’s division of psychiatry, who was not involved with the research. “It’s powerful evidence that things need to change.”

But treatment remains contentious for some health care providers, lawmakers and parents precisely because adolescents are involved. Puberty blockers and hormone therapy, the two gender-affirming treatments given to minors, are most effective if taken when puberty begins, around the ages of 8 to 14, before the age of independent medical consent in most states.

No single set of rules dictates when and how transgender adolescents may receive gender-affirming care. But clinicians generally conduct a series of mental health evaluations in accordance with care practices, such as those set by the World Professional Organization for Transgender Healthcare or the Endocrine Society. These evaluations are meant to assess an adolescent’s understanding of themselves and confirm that medical intervention makes sense.

Dr. Michele Hutchison, a pediatric endocrinologist at Arkansas Children’s Hospital who was not involved with the research, added: “We want to make sure it’s 100 percent justifiable and safe, to the extent you can ever do that in medicine.”

For the most part, she said, her young patients are sure of their decision. “By the time these kids come to me, they’ve known a long time,” she said.

But some young patients in the JAMA review criticized what they saw as “gate-keeping” measures in these evaluations that restricted timely access to puberty blockers and hormone therapy at a moment in development when those treatments would be most effective. Some adolescents said they felt the need to prove that they were “trans enough” to get approval, and others expressed frustration when a parent did not give approval for hormone therapy, thus blocking their access to care.

“We have to be really thoughtful about the structural barriers that we are creating ourselves as providers,” said Dr. Gina Sequeira, a co-director of the Seattle Children’s Gender Clinic, who was not involved with the research. “The majority of the kids I see have already overcome many, many barriers.”

Transgender patients also face broader barriers to health care, the JAMA review found. Insurance proved a common and thorny issue; some families struggled to get puberty blockers covered, and others had difficulty finding a trans-friendly provider in network. And those without insurance faced high costs.

There are also wait-lists, often several months long, to make an appointment. Dr. Cassie Brady, a pediatric endocrinologist at Vanderbilt University in Tennessee who was not involved with the research, said that her clinic often has a wait-list of around 50 people. “We’re doing everything we can to get these children in,” she said.

For a young transgender person, merely the prospect of walking into a clinic can be distressing. One 14-year-old in the review said they felt “petrified” to enter places out of fear that their gender identity would be mocked or dismissed. Another adolescent said that clinicians glossed over their identity, calling it “just a phase.”

Hayden Wolff, who graduated from Tufts University in Massachusetts in 2021, started his medical transition at 18. He recalled a visit to his school’s clinic, where his electronic health records were outdated.

“Here I am with a high fever, trying to get care, and I get misgendered in front of everyone else in the room,” Mr. Wolff said.

The review’s authors also noted that more research was needed on the long-term effects of gender-affirming treatments. When Mr. Wolff met with doctors in Boston, he was urged to hold off on hormones if he was worried about fertility. Doctors in California told him not to worry, even though they were not sure of longer-term outcomes.

“You have to make decisions without much information and data,” Mr. Wolff said.

He decided to freeze his eggs. The doctor who saw him in Boston had never treated a transgender patient before and made Mr. Wolff feel like a “trans specimen,” he said. Nurses at the clinic asked Mr. Wolff invasive questions that were unrelated to the egg-freezing procedure.

“Lab nurses would ask me if I was going to get my penis after this, which ultimately is none of their business,” he said. “If you’re a kid, you don’t feel like you have the power to say to someone, ‘You’re making me uncomfortable.’”

Clinicians said that it would not take much to begin to improve the health care experience of young transgender patients. For instance, patients should be allowed to list their own name and gender before seeing a doctor. “This hit me the closest as a trans person who has received medical care, waiting for them to call my wrong name or waiting for them to address me as ‘mister,’” said Dr. Baer Karrington, a pediatric resident at Seattle Children’s.

In the examination room, Dr. Chong said, doctors and attendants should use gender-neutral terminology and avoid terms like “ovaries” and “uterus.” “You can just say reproductive organs,” she said.

Dr. Sequeira noted that young transgender people of color, as well as rural youth, are disproportionately underrepresented in pediatric gender clinics. “The future of this work is to make it accessible to youth that we’re not currently serving,” she added.

Telemedicine could help bridge that gap, she noted, and doctors in all fields could be better educated in how to care for patients who are transgender. Dr. Karrington said that, during pediatric training, they learned about transgender health care only in the adolescent rotation, which did not address younger transgender children being treated elsewhere in the hospital.

Transgender adolescents and clinicians both expressed a desire to see more transgender providers, who may share life experiences with their young patients. Dr. Karrington, who is the first transgender resident in their program, said they could count the number of transgender pediatricians they knew on both hands. In Atlanta, Piper’s doctor at Queer Med is transgender, which she found comforting. “They know what I’m going through and they can attest to the fact that it gets better,” Piper said.

While Piper hopes more transgender people become doctors, she wants to be a zoologist, inspired by her geckos. “It’s my calling,” she said. “I’ve known that for a long time.”